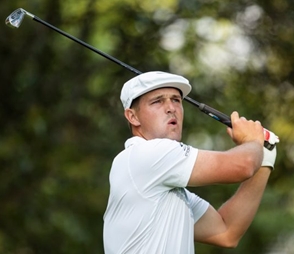 One-Length irons are not new. Various companies have made them over the years, then discontinued them because the demand and volume wasn’t significant enough. Bryson Dechambeau has breathed new life into the discussion with his successful use of same-length irons. Many golfers have rushed out and purchased same-length clubs hoping for better results.

Since our Adjustable Loft club uses the same length for every swing, I thought I would share my views about this phenomenon.

The main point in favor of same-length clubs is that your stance and swing plane are the same. With different lengths, you are bending over at different angles. But with same-length, every swing is the same angle so you are more able to “groove” your swing for better accuracy and consistency.

While Dechambeau’s 4 through wedge irons are the same length (37.5"), his driver is 45" (he is experimenting with even longer), his 3/4 Fairway wood is 43 inches, and his 5 wood is 41 inches. So he certainly has a different stance angle and swing plane for those different length clubs. So the “grooved” swing benefit doesn’t apply to all clubs.

The argument against using the same length clubs is also based on some good points that are worth consideration.

Same length clubs are also the same weight so that they yield the same swing-weight. That means Dechambeau's wedge isn't nearly as heavy as a normal wedge, so it can't go through thick wet grass the same. And his 4 iron is much heavier than a normal 4-iron. So it is heavier AND shorter, thereby not generating as much club-head speed as a traditional 4 iron at about 38.5 inches. Maybe he has the ability to "swing harder" than normal. But amateurs can't do with that with success. Even so, there is no way he can hit his short 4-iron as far as if it were a traditional length, no matter how hard he swings.

Another perspective is that a traditional set with different lengths and weights provide about a 10-yard interval between distances with full swings. To be sure, full swings are much easier to replicate than partial swings. If you don't vary the length, the club head speed is the same with every club and that yields a 15 or 20 yard differential between clubs. So Dechambeau has to adjust his swing speed to achieve smaller increments. That begs the question, “Is adjusting your swing speed easier or more difficult than a slightly different stance angle and swing plane?”

Time will tell whether Dechambeau will stick with the same length (and same weight) irons. But for now, he is making a case for being one of the best golfers on the planet. Is it because of his clubs or because of his skill?

How Does The Divnick Adjustable Club Fit Into The Same-Length Discussion?

The shaft length is the same for all shots, so the stance and swing plane are the same which helps groove the swing. Because our standard 38.5” length is equivalent to a 4-iron, our club can generate more club-head speed than Dechambeau’s 4 iron which is 37.5 inches long, thereby removing the disadvantage of giving up distance on the longer irons.

What about distance control. The Divnick Adjustable has half lofts which allow 5-yard increments with full swings, so there is no need to adjust swing speed or stance. Since full swings are easier to replicate, this is a huge advantage. You can literally take full swings for every shot, and select whatever loft hits that distance.

That is probably why some customers tell us they hit it more consistently with their Divnick than their regular clubs.

Of course, there are disadvantages with the Divnick, relative to weight and designed purpose which we discuss on the disadvantages page. We are the first to agree that an all-in-one club can’t do what dedicated tools designed for specific tasks can do. But relative to the same-length discussion, we think we’ve got the best solution. Dechambeau isn’t going to use our club because it isn’t USGA-conforming. But it is great for casual play and has the added benefit of helping you groove your swing.

Let me know what you think.