How does the DIVNICK™ compare to other adjustable golf clubs?

There have been over 100 patents for adjustable loft golf clubs since 1895. We discuss this in more detail on the development page. But only a couple made it into the modern era which we will discuss on this page.

We also want to mention that we wholesale our clubs to some resellers who market them under a different name. For instance, the "All-In-One" adjustable is our club. The only difference is they charge a lot more. We also supply our clubs to some gift and flight catalogs.

Over the years, various companies have offered different ways to achieve portability. Several companies have had one shaft with a bag of different heads. One of the first to do that was called Voyager about 1990. You can click to enlarge the photo of their set to the right. A more recent version of that approach was made by DV8 and included a backpack. This approach still includes a relatively heavy bag, took time to change the heads between every shot, and would still have to be checked as baggage and paid for.

You can imagine how time-consuming it would be to change heads on the course. And the cost is several hundred dollars. So they haven't been successful solutions.

Others have offered a reduced number of clubs with 2 or 3 lofts per club with mixed results. One example was the "Walking Sticks" shown on this page. Each of the 3 clubs was a different length shaft to more closely resemble the lengths in a full set. Their clubs did not telescopic so were not beneficial for travel, and you still had to carry a bag or lay the clubs in the grass when you made your shot. With our Divnick Adjustable, you never have to set it down.

The rest of this page will focus on single clubs with full adjustability.

A few years after we introduced our Whole-In-One, a mail-order company made a direct copy. In fact, they made their molds right off of our club...didn't even try to change the look. We were able to persuade them to cease and desist. A couple others have come and gone over the years.

However, even the direct copies did not include several of the most important features of the Divnick such as the half-loft transmission which is very difficult to cast, our proprietary telescopic shaft, and the blend of durable alloys.

Telescopic Shafts: Telescopic shafts have been attempted before. But they used a .375" tip-diameter iron shaft that is cut into two sections. So they collapse down to only about 28" in length and are very stiff. Logically, when you overlap a few inches of shaft sections, it stiffens up the shaft dramatically. So a shaft that is designed for an iron head-weight ends up being way too stiff and yields unrewarding shots.

We designed our head to fit on a .335" tip-diameter driver shaft. Ordinarily, if it was a one-piece shaft, that would be too flexible. But we cut the shaft into 3 sections with 2 overlapping portions. Not only does that collapse down to a shorter 17" length which is much more convenient for travel, the overlapping sections stiffen it back up to a normal flex which produces a rock-solid shaft, majestic shots, and a great feel. We also include a short proprietary carbon steel inner piece that strengthens the tip at the hosel.

Lofts: Most other adjustable clubs have only had odd lofts (3, 5 ,7, 9) because they do not have a "ring gear" transmission which is quite a bit more expensive to make. Also, they mold their heads out of 300-series stainless which is not tough enough for the number of teeth necessary for a transmission, while ours is 17-4 stainless allow blend...a more expensive and more rugged material.

Lever: Some others have used levers that are chrome-plated plastic. Because plastic flexes, the chrome is vulnerable to flaking, so it is not a good engineering option. It also adds weight to the heel area where weight is not helpful. Our lever is glass-filled nylon, which is designed for the automotive industry in various high-heat and strength environments, so it is very rugged. The lever is pressed over a grade 8 nut, so the lever is only providing a little leverage for tightening. The nut provides the actual locking. 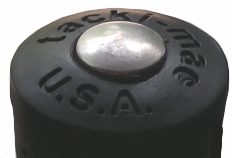 The Divnick uses a proprietary machined stainless steel collapsing cap that is pressed onto the end of the shaft. As shown in the accompanying picture, a portion of it extends up through an enlarged hole in the end of the grip. So the impact from striking it on a hard surface during the collapsing process (see instructions) is transferred directly into the shaft to make collapsing very easy.

Previous telescopic clubs did not use a collapsing cap so the soft end of the grip cushioned the impact and absorbed the force making it very difficult to collapse their shaft. It also made the club "bounce" back up which can cause injury, or "cookie-cut" through the end of the grip after only a few collapsing attempts.

For a couple of decades prior to our introduction of the DIVNICK™, perhaps the best design was being sold as the "Super Stick". Patented in 1974 by Donald Moore (now deceased), it was strongly-built and replicated the traditional lofts.

Its drawbacks were that it did not have perimeter weighting, the mechanism was high on the back of the head which produced a high center of gravity and caused it to interfere with the ground on steeper lofts, the shaft alignment was behind the head rather than offset in front as with modern clubs, it required a coin to loosen and tighten, had 3 confusing index marks and numbers to line up, and the 2 piece shaft was a stiff .395" diameter that fit over-the-hosel. It could not collapse any shorter than 23" which is too long to fit into a brief case or other small carry-on luggage.

A few years after we came out with the DIVNICK™, the originator of the Super Stick adapted some of our design features on an improved version of Super Stick which he called the "Walker". He later changed the name to the "Universal". We have side-by-side photo comparisons linked at the bottom of this page.

We believe the Universal was an improvement over the Super Stick and was the best of the other adjustables on the market. But it still had some important weaknesses. It still included the stiff .395" shaft and 23" closed length. The shaft exposed a critical performance difference. As mentioned above, normal iron shafts are .375" diameter at the tip which is epoxied into a female hosel socket. The Universal used an extra large .395" tip shaft that fit OVER a male stud which was easier to manufacture. When it was cut to make it telescopic, the overlapping sections resulted in an even stiffer shaft.

The Universal replicated each of the traditional lofts while the Divnick can be set on twice as many because it includes half-lofts.

Click here for a head-to-head photo comparison of the DIVNICK and the Universal/Walker.

We have had many customers who have previously purchased a Universal and have offered some direct comparison feedback which we have linked in this paragraph. In addition to the DIVNICK™ hitting farther and more accurately, which will be discussed below, the most common report is that the DIVNICK™ is much easier to use. The reasons for this will become more evident in the photo comparisons. Click here to read some reports from customers who have used both clubs.

Click here for a head-to-head photo comparison of the DIVNICK and the Universal/Walker.

Click here to read testimonies from customers who own both a Universal and a DIVNICK.